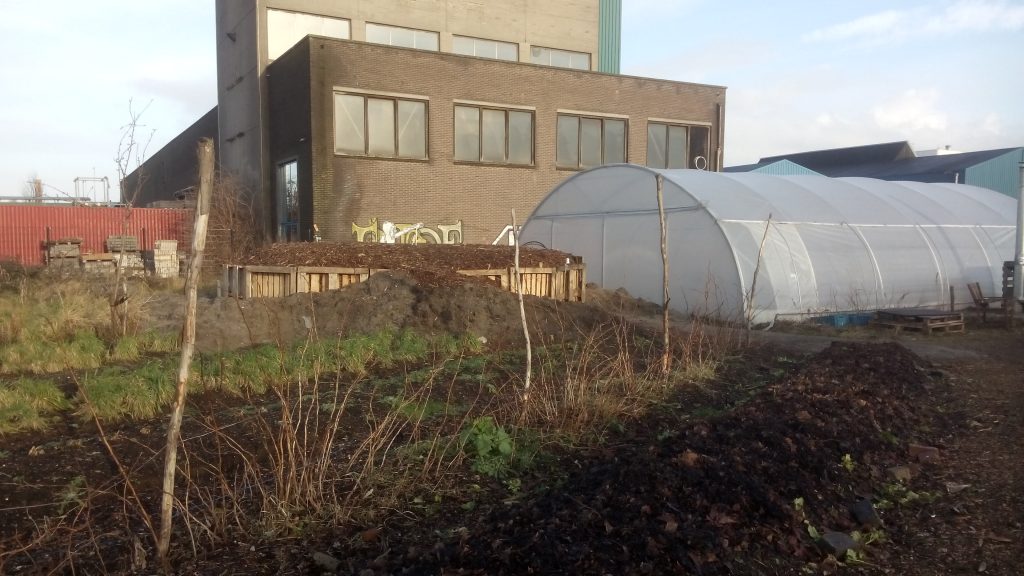 In december 2014 the Dutch “Voedseltuin” (Food Garden) created a biomeiler to warm their greenhouse and produce compost. Early 2017 the biomeiler life ended and the compost was analysed. This article describes the CO2 capture capabilities of this biomeiler. Teaser: “During the composting process about 30 % of the original CO2 content is returned to the atmosphere, against 100% during burning.”

Carbon dioxide (CO2) is naturally captured from the atmosphere through biological, chemical, and physical processes. It is estimated that approximately 258 billion tons of carbon dioxide are converted by photosynthesis annually, half of which occurs in marine environments and the other half in terrestrial organisms such as trees. The gross amount of carbon dioxide fixed is much larger since approximately 40 % is consumed by respiration following photosynthesis. [1]

Carbon sequestration involves long-term storage of carbon dioxide to mitigate or defer global warming. It is as a way to slow the atmospheric and marine accumulation of greenhouse gases, which are released by burning fossil and organic fuels. [2] Biosequestration or carbon sequestration through biological processes is possible in terrestrial form by creating and enhancing peat bogs, reforestation, urban forestry, wetland restoration and agriculture. [3]

Producing wood compost with a biomeiler helps these processes in multiple ways.

Currently many peat bogs are threatened by the substrate industry because there is no good alternative for using peat, since it has a particular combination of properties that is hard to create otherwise. Mainly the ability to hold large amounts of water while not containing easily available nutrients such as nitrogen, phosphor and kalium makes it a very valuable resource. However, from the analysis of several biomeiler wood composts similar properties are obtained. Because of the slow and steady composting proces the end product has the ability to hold over three times it’s own weight in water while having relatively low nutrient levels. This creates the possibility for biomeiler wood compost to replace peat in substrate production and so reducing the pressure on the valuable peatlands.

Secondly the use of biomeilers for producing compost creates a new possibility for long term storage of organic material flows. Beneficial use of the heat produced while composting in a slow and steady way creates an incentive for long term space use. At the same time the need for other ways of heating is reduced thus lowering the burning of fossil or organic fuels. This way the knife cuts on both ends.

A mayor pitfall with composting organic material is the speed of the process. Industrial composting facilities are generally composting so fast that a mayor part of the biologically fixed carbon is emitted during the process. On top of that the carbon which remains in the end product is not transformed to a stable form so it will be released into the atmosphere again within a few years after applying it in substrates or direct soil agriculture. By slowing the composting process down as much as possible the amount of carbon fixed can be much higher as shown in the analysis and calculations below.

Thirdly the application of biomeiler wood compost is beneficial for the type of ecosystems which have the largest effect on biosequestration. Because of the high wood content in the organic material (over 70%) and the stable composting process (without turning) the amount of fungi that can develop is much higher than in any other composting process. This relatively fungi rich wood compost is mainly beneficial for woody crops in agriculture such as food forestry, reforestation projects and urban forestry. Exactly these types of long term projects create a mayor possibility for carbon sequestration.

Lastly the largest and most direct contribution to carbon sequestration by biomeiler wood compost is in the product itself. Apart from the positive influence on the other fields as explained above the biggest advantage is the direct and long-term storage of carbon in the soil by applying biomeiler wood compost. Analysis shows this can be up to 70% of the carbon dioxide that is converted by photosynthesis in the plants that produced the organic matter. This is a lot, if you image that an average tree in central Europe absorbs around 10 kg CO2 per year [4] and after it has been cut down it will release near to all of the carbon it has absorbed in it’s lifetime. By composting the wood instead of burning it a reduction of up to 140% of CO2 emissions is realized.

Let’s look at an example calculation for a standard type biomeiler in Rotterdam, The Netherlands. This particular biomeiler had a diameter of 6 m with a volume of 75 m³ and was build entirely out of wood cuttings from the city streets. Mind that all of these shrubs and trees need annual maintenance and are being shredded for reduction of the transport volume. All of the wood chips from this source which aren’t used for composting are incinerated to make electricity for the city of Rotterdam. So this gives us a baseline of 100% CO2 emissions from the wood: 75 m³ of wood chips weigh about 31 tons and have absorbed about 21 ton of CO2 which is completely released into the atmosphere.

After composting for 24 months and a ripening period of 3 months, the finished wood compost has been analyzed. The dry matter or dry weight is measured at 20,7 % and this has a carbon content of 42,0 %, thus each ton of compost contains 86,9 kg of pure carbon. Since the moleculair weight of CO2 is 3,67 times that of just C (pure carbon) this amounts to 319 kg of absorbed CO2 per ton of compost.

We are not there yet, since 31 tons of wood chips are not directly transformed into the same weight of compost. We have to look at the volume of 75 m³ which changed into roughly 37 m³ of wood compost over the course of 27 months (± 50% volume decrease in this biomeiler). The total weight of 37 m³ wood compost is about 48 tons (density of 1,3 ton/m³), mainly because of water absorption this is roughly 150% of the starting weight in (dry) wood chips.