A model was built for a domestic heating system equipped with a Biomeiler and a heat pump. The heat pump uses the heated biomeiler water as the heat source and the domestic water as the heat sink. The model simulates the microbial growth and death rate, substrate conversion rates and heat generation inside the pile. A heat balance, consisting of the metabolic heat generation, heat losses due to convection and evaporation, heat load of the flowing water and heat capacity of the pile itself, is used to calculate the corresponding temperature at each 1 hour time instant for one year. Set points are used to determine when heat is demanded by the building, when the heating system can be operational and when the heat pump needs to be turned on.

Numerical calculations showed that the simulated Biomeiler produced almost 45 MWh of energy after one year resulting in 2.47 kWh/kg of biodegradable organic matter. Nearly half of this energy got lost to the environment and the other half was used for the wall heating system. This heating system can be operational for 73% of the time that heating is demanded by the building. Almost 31% of this time, the heat pump was needed to elevate the inlet temperature of the wall heating system.

Many assumptions were made building this mathematical model. By tackling these assumptions, the model will become more realistic. Firstly, more microbial population types should be incorporated to get better pile temperature fluctuations. Secondly, more microbial growth factors should be incorporated, like oxygen and moisture content dependency. Thirdly, the presented model assumes a uniform temperature core with a conductive shell (insulation layer). In reality, the pile core does not have a uniform temperature. Therefore, the pile should be discretized in space in order to incorporate the conduction mechanism which makes it possible to simulate the transport of heat throughout the pile. Finally, the model constants should be validated with experimental data.

It was very interesting to learn more about Biomeilers and all the biological, chemical and physical mechanisms that are involved. The presented model could function as a predictive tool for sizing and optimizing a heating system equipped with a Biomeiler and a heat pump. I hope an eager student or any other interested individual will continue the project and improve the presented model. 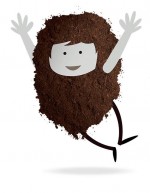